Having recently finished We Need to Talk About Kevin, I’ve been thinking about epistolary books.

An epistolary book is one made up of letters: the beginning of Frankenstein, for example, or We Need to Talk About Kevin.

They present a bit of a conundrum for me. For instance, this excerpt here seems a bit silly:

That night you were furious.

“So a little girl scratched herself. What has that to do with my son?”

“He was there! This poor girl, flaying herself alive, and he did nothing.”

“He could have called someone, couldn’t he? Before it went so far?” “Maybe, but he’s not even six until next month. You can’t expect him to be that resourceful or even to recognize what’s ‘too far’ when all she’s doing is scratching. None of which remotely explains why you let Kevin squish around the house, all afternoon from the looks of him, plastered in shit!” A rare slip. You forgot to say poop.

“It’s thanks to Kevin that Kevin’s diapers stink because it’s thanks to Kevin that he wears diapers at all.” Bathed by his outraged father, Kevin was in his room, but I was aware of the fact that my voice carried. “Franklin, I’m at my wit’s end! I bought all those there’s-nothing-dirty-about-poo how-to books and now he thinks they’re stupid because they’re written for two-year-olds. We’re supposed to wait until he’s interested, but he’s not, Franklin! Why should he be when Mother will always clean it up? How long are we going to let this go on, until he’s in college?”

“Okay, I accept we’re in a positive reinforcement loop. It gets him attention — “

“We’re not in a loop but a war, Franklin. And our troops are decimated. We’re short on ammunition. Our borders are overrun.”

Having been married to Eva, having been there when this conversation happened, why would Franklin need to be told this much detail?

Of course, it turns out that the letters were more therapeutic than communicational, so this detail may have been for Eva, but it highlights an issue with epistolary books: namely, the reader.

The unacknowledged, unspeaking audience to whom the whole book is addressed presents an issue for the writer. We, as readers, know nothing of the history of the people writing to one another. To write normally, omitting the details we need to know to build up a full picture, would be to exclude the very people the book is written for. But the write letters filled with details which would be, if the book were non-fiction, comical, make it seem patronising and slightly unrealistic.

Is there a middle ground? Are then any epistolary books which manage to get the balance just right?

Music travels from vinyl to cd to downloads. Videos that once had to be fast-forwarded through adverts and rewound back to the start can now be on your screen at the push of a button.

Alongside technological advances, there seems to be a strange reminiscence or nostalgia, as if these new advancing technologies are always harking back to their ancestors.

The save button is a floppy disk. Phone cases that look like tape players.

Books started off, not as books but as scrolls. Even the text was different, as it was written by scribes, who only marked where they would pause for breath when it was to be read aloud again. The nature of scrolls meant it often had to be read in one, long go, as if you stopped, you lost your place. END_OF_DOCUMENT_TOKEN_TO_BE_REPLACED

Dads, I realised as I sat down to write this post, are not well represented in literature.

Even ignoring these father figures, we are faced with a plethora of dads who frankly fail in their positions as parents. Woolf’s To the Lighthouse sees a strange, manic father who embarrasses his children – and was based upon Woolf’s own father. In Wharton’s The Custom of the Country we see Undine’s doting father unwittingly help to turn his daughter into the shallow, materialistic, morally corrupt woman we see at the end of the novel. Do not even get me started on Lord Asriel in His Dark Materials. END_OF_DOCUMENT_TOKEN_TO_BE_REPLACED

Reading is an amazing thing. Every book every written is made up of the same 26 letters and a small number of punctuation marks, and yet each touches us in a different way. We lose ourselves in books, allow our minds to be transported, come to know the characters as dear friends.

Reading allows an escape in a way few other things can, because it allows respite from this world; it allows us to escape for the time that book is in our hands. Thought provoking, emotional, completely engrossing, books are so important.

Which is why it’s difficult to write blog posts on books. END_OF_DOCUMENT_TOKEN_TO_BE_REPLACED

I recently checked out the Book Swap shelves in my work, and saw On Beauty by Zadie Smith. It’s a book I’ve always wanted to read, but have never gotten around to reading. So, I picked it up.

A colleague of mine read the blurb, out of interest, and came to the conclusion that, “it looks good; just a bit too girlie for me”.

Pink? Must by for girls.

When it comes to good fiction, there’s no such thing as ‘girlie’. Yes, some authors aim their writing towards men (Lee Childs, Dan Brown) and some at women (Jodi Picoult, Maeve Binchie). But then you get past the take-your-brain-out trashy fiction (don’t lie, you know they are), books transcend gender. END_OF_DOCUMENT_TOKEN_TO_BE_REPLACED

Julian of Norwich’s Revelations of Divine Love did something no other piece of medieval literature has done to me. It stirred up a lot of emotion in me; I had, I’ll admit, a lump in my throat.

At the age of thirty-something, her prayer was answered. She suffers a fever; can’t move, can’t speak; can hardly breath. At one point, her mother closes her eyes, thinking she’s dead.

A priest and a young boy from the town visit, to say the last rites. The priest holds a crucifix with Christ on it in front of Julian, and she has a vision. A series of showings from God himself. END_OF_DOCUMENT_TOKEN_TO_BE_REPLACED

Kerourack sat down to write On the Road, and did so in one sitting.

In fact, that wasn’t enough for him.

Using a typewriter meant he had to stop at the end of each page to put another one in. This stopped the flow of his writing, so he taped together rolls of architect paper into a continuous roll which meant he never had to pause to change a page. 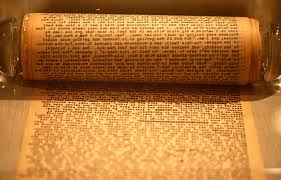 The Scroll of Kerouac’s On the Road

This, on its own, is an interesting fact you can use if the conversation ever runs dry at a dinner party.

Viewed in context of the book however… END_OF_DOCUMENT_TOKEN_TO_BE_REPLACED

The early 20th Century had a massive impact on American fiction.

Questions of identity, after America started to gain their own identity as a country, plague early twentieth century writing. Questions of morality, a midst an economical boom and consequent collapse, changing gender rolls and, later, when the prohibition made illegal substances cool and acceptable, created themes for many American authors. After gaining independence, authors begin to write in what is now considered an “American” style, rather than mimicking their forebears as 19th century authors did.

Publishing Sister Carrie at the start of this era, on the turn of the century, Dreiser was very much involved in this movement towards an independent American literature, and also very interesting in ideas of morality.

END_OF_DOCUMENT_TOKEN_TO_BE_REPLACED

I like to see books as not simply books, but as a way of looking at life.

Nearly four years ago, my best friend came around to my house. It was snowing outside: the first snow of the winter. We watched Wimbledon and then went outside to have a snow flight, make snow angels and some little snow men.

Little did I know that this was – metaphorically speaking – the end of a novel. He went away to see the next day, for his first trip in the Merchant Navy, and, unfortunately, never made it home.

Of course, initially, a day never passed when he didn’t cross my mind. When I managed to get through a day without thinking of him, I felt so guilty. END_OF_DOCUMENT_TOKEN_TO_BE_REPLACED

I’m officially finished university until the 7th of January 2013. Assuming we make it that far, with all this End of the World Being Nigh stuff going on.

The fact that the first thing I do after handing in my last essay is go to the gym, then write a blog post, speaks volumes. I also intend to finish a knitting project this weekend.

I thought I would celebrate my lack of university work by writing a post on – wait for it – a book I’m not studying. Hard-core, I know.

Last week was Book Week in Scotland, which I had hoped to write about but university work got in the way. My boss, however, did ask me to write something. There’s a magazine for the area of Glasgow I work in that asked every business to submit a paragraph on their favourite book, and I was asked to do this on behalf of the gallery I work in. I wrote a paragraph on Virginia Woolf’s Orlando, and it was published on-line and in print two Mondays ago.

Unfortunately, I can’t find it on-line, and don’t have a copy of what I wrote, so I’ll start over again for my lovely followers. Also, I intend to write more than a measly paragraph!

END_OF_DOCUMENT_TOKEN_TO_BE_REPLACED